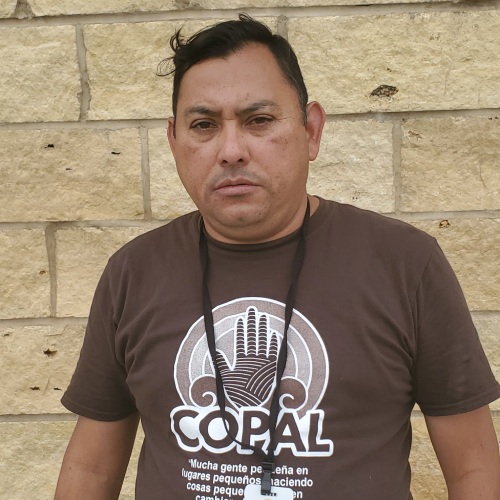 Elmer SantaCruz Baires is a Salvadoran social justice fighter and TPS Holder who has been living in Minnesota since 2000. He was a Minneapolis construction worker and is a founding member of CTUL and of VPTDC. In the past 15 years, Elmer has organized with $15Now, SEUI Cleaning Workers, Alianza Tepeciana (National), Stop Line 3, and many more campaigns.

Elmer now serves as a Labor Organizer at COPAL’s Primero de Mayo Worker Center. He deals with forms of exploitation that are even worse than the norm. “Sometimes bosses will bring construction workers here with a promise of not only paying them an hourly wage for work, but also promising workers they’ll cover their housing and meals. When they get here, they’re not covering their housing or their meals, and they’re also stealing their wages,” he says. “That’s what we consider labor trafficking. If workers say they want to go back to where they came from, bosses use intimidation, and threaten to call the police on workers.”

Since Elmer speaks Spanish and worked as a subcontractor, he understands the issues plaguing workers. He also understands issues plaguing his community. He speaks out against machismo by speaking with workers about fighting gender stereotypes and the need to uplift our sisters in the fight for justice.

His long-term goal is to use grassroots organizing among workers to change the entire structure of the construction industry, so the more grotesque economic arrangements don’t happen in the first place. In the meantime, he has helped to rescue workers from conditions that he compares to “modern-day slavery.” Without Primero de Mayo Workers’ Center, those interventions may never have happened.